Another Catholic priest killed in the Central African Republic

The Catholic Church in the Central African Republic is again in shock after the killing of the vicar general of Bambari, in the centre of the country, on the 29th of June. Father Firmin Gbagoua, 52, was fatally wounded, when unidentified gunmen stormed the presbytery of St. Joseph’s Cathedral of Bambari at around 7pm.

The assailants, said to be in large numbers, infiltrated the compound, asking for money. As Fr. Firmin had no money and in order to preserve the lives of his colleagues, he invited the armed men to follow him into his bedroom and take what they wanted. Witnesses said they then heard raised voices, followed by a gunshot.

“When the other Fathers arrived in the room, they found Fr. Firmin lying in his blood…, he was hit by a bullet in his abdomen”, said Msgr. Nestor Nongo Aziagbia, vice-president of the Episcopal Conference of the Central African Republic.

The UN peacekeepers, whose checkpoint was just 300 metres away, arrived at the scene only after the assailants had escaped. Fr. Firmin Gbagoua was quickly taken to the hospital in Bambari. “Unfortunately, the efforts made by the medical team were not enough to save the life of our brother Firmin,” said Msgr. Aziagbia. “The bullet which hit him in the abdomen caused a big hole in his back, at the spine. He died as a result of a haemorrhage.” Fr. Firmin Gbagoua was buried on Saturday afternoon in the missionary cemetery of Saint Joseph, in Bambari. 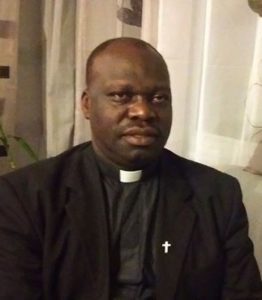 As the vicar general of the Diocese of Bambari, Fr. Gbagoua had been at the front line of interreligious efforts between Christians and Muslims. Some believe that this commitment may have earned him enmity among some people. “It is impossible to describe this death as an accident or simply a that has gone wrong,” commented a nun who wanted to remain anonymous. “Fr. Firmin was known to everyone and even armed groups.”

His killing is the latest of a series of attacks targeting Catholic priests in CAR. In March, the same Diocese of Bambari lost another cleric – Fr. Désiré Angbabata, parish priest of Séko village (about 60km from Bambari), when armed men believed to be militants of a Séléka off-shoot, l’Union pour la Paix en Centrafrique (UPC), a mainly Muslim and Fulani militia, attacked his village.

They also urged “the whole Christian community to remain calm and in prayer so as not to fall into the trap of those who want to show that Christians and Muslims can no longer live together in order to create the partition the Central African nation”, given that After the assassination of Fr. Albert Tougoumalé Baba in May, two mosques were burned down by an angry mob in Bangui. Further acts of revenge followed, prompting various calls for calm and restrain from religious and political leaders.

One might ask, why the violence in Bambari? It is situated in the centre of the country, in a strategic position, both as the main economic centre of the country and a mining city. This has led armed groups, including UPC militants and Anti-balaka militia, to fight for control of natural resources.

Bambari is divided into two, along religious lines, by the Ouaka River: the Christian community on the west side, the Muslim community on the opposite east bank. The Catholic compound is located in the Muslim neighbourhood, where UPC militants are active, despite the presence of two MINUSCA (UN peacekeeper) contingents, from Gabon and Mauritania. Since May, the compound has been attacked three times by armed men.