Hungary Receives Recognition by the USA for Helping Persecuted Christians

The Washington-based Centre for Security Policy (CSP) established in 1988, has awarded the Hungarian nation with the“People of the Cross”award for its efforts to help persecuted Christian communities.

Tristan Azbej, State Secretary for the Aid of Persecuted Christians, received the award at a gala dinner in Washington, DC, on Thursday night.

In his speech, Gregg Mitchell, co-leader of the International Religious Freedom Roundtable, noted the courageous role of Prime Minister Viktor Orbán. He also acknowledged the Hungarian government’s readiness to help persecuted Christians in the world. He referred explicitly to Hungary’s programme aimed at helping Christians in the Middle East that was launched in 2016. Mitchell said the Hungarian initiative was exemplary and called on other governments to follow suit.

In his discourse, Tristan Azbej emphasised a concern that currently, out of  a spirit of political correctness, many people are not talking about Christian persecution but refer rather to the persecution of  “ethno-religious” minorities. He went on to say:

“We are openly stating that it is Christians who who are persecuted. In the here and now Christianity is the most persecuted religion in the world.”

Concerning the recent European Parliamentary vote on the“Sargentini report”that criticises the rule of law in Hungary, the State Secretary said that in real terms the document had been adopted because Hungary would not open up its borders to allow massive illegal migration. The audience manifested their disapproval of the attitude taken by the European Union and then applauded the Hungarian Secretary of State.

The state secretary used as an example, the Telskuf settlement in Iraq, where the Hungarian government has rebuilt the ruined homes of more than nine hundred Christian families that were previously destroyed by the Islamic State terrorist organisation. 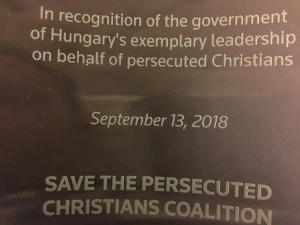