This continent’s strength is stemmed from nation states, “Europe is a home of nations not a melting pot”

Hungary has been a part of Christian Europe for a thousand years. “We are Europe because we remained Europeans even when they sold us off in Yalta, and also in ’56 when they let us down”, Prime Minister Viktor Orbán said on Tuesday on the Memorial Day of the 1956 revolution and freedom fight, outside the House of Terror Museum in Budapest. He stressed, “Those who want to forge the European Union into a European empire are all supporters of immigration”

He highlighted that after 1956 there was communist dictatorship in Hungary for another 34 years. Cold daily life in dictatorships tends to undercut human dignity, and even after their fall there remain emptiness, a diminished life force and pettiness, he pointed out. He took the view that “this is what we Hungarians escaped from, this is what the freedom fighters of fifty-six rescued us from”.

It was not human weakness, not division that was handed down to us, but the example of courage, heroism and greatness”. This was the only way that we Hungarians could be proud of our country even during communist oppression, he pointed out.

The Prime Minister stressed: “Let us choose independence and the cooperation of nations against global governance and control. Let us reject the ideology of globalism, and support the culture of patriotism instead”. He stated that Europe is different from the other continents: Europe is a home of nations, it is not a melting pot.

“Europe was led astray not by proud nations, but by imperial designs. Imperial experiments and experimenters are responsible for the monstrous wars of the twentieth century, a sea of suffering, and the multiple destruction of a thriving Europe.”

“We believe that every nation is special, and unique in its own way, and can brighten up the segment of the world that is entrusted to it”, he said, stressing that this is why the Hungarian people rose up already in 1956.

“We love our culture which sustains and protects our freedom. We believe in strong families, we hold that our traditions and history are exceptional, we celebrate our heroes, and above all we love our country. We do not want to, and indeed we will not, surrender it for the sake of any empire or global governance”, the Prime Minister stated, adding that they do not want to wipe national feelings away, but in actual fact they wish to encourage them so that they release the abilities and talent inherent in Hungarian people.

He underlined that we Hungarians are second to none when it comes to complaining, and we can mourn ourselves more sincerely than anyone else. Yet, “here we are, one thousand one hundred years after the conquest, a thousand years after the establishment of the Christian Hungarian State, as one of Europe’s oldest nations, surviving occupiers and occupations”, he said. He believes that eternal Hungarian heroism must be there somewhere among the reasons for the survival of the Hungarian people. 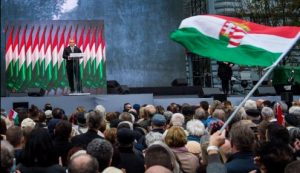 Mr Orbán said that when after almost half a century of Soviet occupation and communist oppression we regained our freedom, “we thought we had finally returned home”. He took the view that after the departure of the Soviets “we believed that we had finally found peace, that our history, culture and world political situation had finally fallen into harmony, that we could occupy our position in Europe again”.

Hungary has been a part of Christian Europe for a thousand years. “We are Europe because we remained Europeans even when they sold us off in Yalta, and also in ’56 when they let us down”, he said.

But today European nations, “including us Hungarians, are compelled to face challenges of the distant past”. He added that Europe finds itself in danger not due to external military threats, not due to American or Soviet aspirations, but through its own doing.