Professor Christian de Moliner claims that a second society has formed in France, which he described as: “A branch that wants to settle their lives on religious values and is fundamentally opposed to the liberal consensus on which our country was founded.” Rather than veil the face or adopt unimaginable measures in democracy (forced evictions of the most radical), why not establish a dual system of law in France?

De Moliner writes that Emmanuel Macron winning the Presidential election will not make the problems disappear, it will only kick the can down the road. “We can convert now the 30% of Muslims who demand the introduction of sharia law to the merits of our democracy and secularism.”

“We will never be able to eradicate the radical Islamism,” he says, adding: “While we are not yet at open war, the faithful of the Prophet are already regrouping in areas sometimes governed by special rules.”

The academic’s ‘solution’ is to create a “state inspired by colonial Algeria and Mayotte of the twentieth century: one territory, one government, but two peoples: the French with the usual laws and Muslims with Qur’anic status (but only for those who choose it).”

“The latter will have the right to vote unlike the natives of colonial Algeria, but they will apply Shariah in everyday life, to regulate matrimonial laws (which will legalize polygamy) and inheritance. This system worked without too many problems from 1890 to 1940 in Algeria.”

“They will no longer apply to French judges for disputes between Muslims, but to Cadis. On the other hand, conflicts between Christians and believers will remain the responsibility of ordinary courts.”

“However, this system would involve schools or hospitals reserved for believers and therefore the creation of local committees that will manage them independently. A council of ulemas will fix the religious law, but the autonomy will stop there.” 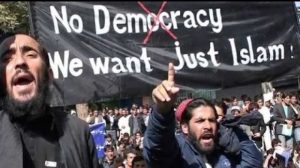 De Moliner points out that in France a parallel society already exists and that it has opposite values compared to the Enlightenment principles upon which French society is founded.