Belgian Christmas Market is named Winter Market, because it ‘could offend other beliefs’

Organisers of the Christmas Market in the Belgian city of Bruges changed its name to Winter Market. The decision was made to not ‘offend other beliefs’, Belgian newspaper HLN reports.

The newspaper says that the Christmas lights on the market will be replaced by neutral winter lights. People and politicians are not amused about the changes.

“From now on we can no longer speak of the ‘Christmas market’ in Bruges, but of the ‘winter market’,” he added. “This is not only a ridiculous decision, it also goes against our individuality. Bruges has a very beautiful and old tradition in terms of Christmas. Whether you are religious or not, it is part of our culture. I do not want to give in to this foolish form of ‘tolerance’.”

Some respondents to the article asserted that the change was made to avoid offending Muslims.

“Do we still live in Belgium?” asked one. “Our norms and values are eroding, our culture is disappearing and our feasts need other names. And we must respect their Ramadan and Sugar Feast.”

However, organizer Pieter Vanderyse said the change was made merely to make the market appear more “neutral,” adding that other Belgian cities had changed their ‘Christmas Markets’ to ‘Winter Markets’. 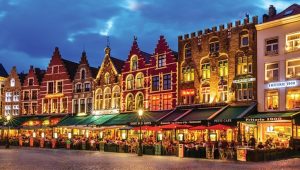 Something similar is going on in Sweden, not very long ago SVT news reported that Sweden’s, and perhaps the world’s largest outdoor Christmas concert “Oh Holy Night”, which traditionally airs on Swedish national TV on Christmas Eve each year, has been cancelled.

But there are other examples as well in Western Europe This is not the first time that the Christian foundation of Christmas has been hidden in order to avoid offending Muslims.

In December 2016, the Austrian embassy changed the name of its “Christmas delicacies” to “Winter delicacies” out of consideration for the feelings of Muslims.

Last year in Germany, a school was forced to re-locate its annual Christmas party after a single complaint from a Muslim student.

A Christmas tree in the Italian city of Bolzano was also removed from the town hall after fears that it could “hurt the feelings” of or “offend” Muslims.

Last year, a Christmas movie set to be screened in the French city of Langon, where Muslims are allowed to pray on the streets, was banned, because it was “too Christian”.