While Bibi and her family remain under tight security in Pakistan, many Christians fear that when Bibi is allowed to flee the country the Christian community at large will be held responsible. Fears of attacks on individual Christians, Christian neighborhoods, and churches are being taken seriously and Pakistan has deployed security officers to these locations.

11/14/2018 Pakistan, As International Christian Concern reported – At the moment Pakistani Christians are living in fear that their community will face severe backlash following the acquittal of Asia Bibi. On October 31, Bibi, a Christian woman formally on death row for committing blasphemy, was acquitted of all charges by Pakistan’s Supreme Court.

Bibi’s blasphemy case has been at the center of a contentious and violent debate over Pakistan’s notorious blasphemy laws. Following the announcement of the Supreme Court’s decision, mobs of hardliners took to the streets in protest. According to Peter Jacob, the Executive Director of the Center for Social Justice, Christians were targeted for assault by the rioters.

“The situation on the roads is very tense today,” a Christian from Lahore, speaking on condition of anonymity, told ICC immediately following Bibi’s acquittal. “Muslims have blocked the roads, set fire to tires, and are protesting continuously. Christian are feeling very insecure.”

“The situation all over the country is very tough,” another Christian from Sindh, also speaking on condition of anonymity, reported. “Serious threats are being expected. All over the country is blocked now because people are demonstrating against the decision. Remember us in your prayers.” 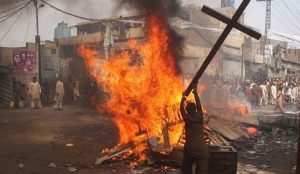 Picture above was shot in Pakistan in May 2016, when Christians have been driven from their homes by a lynch mob of Muslim extremists after Imams issued a fatwa against one of their number over a Facebook video that appeared on his news feed. People now fear something similar might happen in the future.