In the Parliament Building in Budapest on Thursday, Prime Minister Viktor Orbán and Samuel Brownback, United States Ambassador-at-Large for International Religious Freedom, spoke about planned joint action on the spread of anti-Semitism in Western Europe and on the protection of persecuted Christians.

Bertalan Havasi, the Prime Minister’s press chief, informed Hungarian press agency MTI that the Ambassador-at-Large had stated that the issue of religious freedom is a special priority for the US administration, and therefore it is extremely interested in the Hungarian government’s policy for aiding persecuted Christians.

Mr. Orbán and Mr. Brownback, he said, had both expressed concern at the renewed spread of anti-Semitism in Western Europe – partly as a consequence of the migration crisis.

The Ambassador-at-Large told Mr. Orbán that, together with the private sector, the US administration is making financial resources available to enable persecuted Christians to return home to their native lands in the Middle East which they were forced to flee from. He expressed recognition of Hungary’s readiness to make major sacrifices – almost beyond its means – in pursuit of this goal.

The Hungarian prime minister informed his guest about Hungary’s position that, rather than importing problems, help should be taken to where it is needed.

Mr. Brownback was pleased to acknowledge the steadily improving cooperation between the Hungarian and US leaderships. In this context, Mr. Orbán repeated that Hungarian-US relations are excellent. 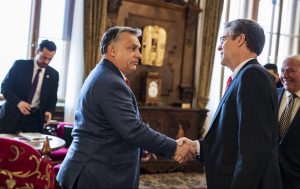