Reassuring news from France: 85% of French people would not ban the exhibition of Christmas Nativity scenes in public places

The weekly edition of the French paper Le Point released the results of its online survey where its readers were asked if they would object to Nativity scenes being erected in public places.

The survey of Le Point yielded surprisingly positive results. Up until the evening of the 20th of December, 85% of the voters answered the question: “Would you ban the erection of Nativity scenes in public places?” with a ‘no.’ The majority of those surveyed believe that Christmas in France is an ancient tradition that touches believers and unbelievers alike.

One of those surveyed wrote: “No. We cannot ban the presence of a Nativity scene anywhere in the country. It is a part of our identity and one of our traditions.”

About 45,000 people responded to the survey conducted by the news portal, indicating that the views supporting the erection of Christmas Nativity scenes reflect the opinion of the greater public.

One might conclude that recalling at Christmas time that  the son of God was born and died to deliver us from our sins is not only a matter for the Christian Church. The majority of those polled seem to be aware that the birth of Jesus concerns the whole created world. 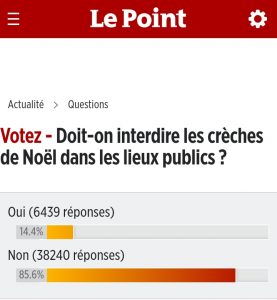