Cardinal Parolin touched by the faith of Iraq’s martyred Christians

Vatican Secretary of State, Cardinal Pietro Parolin described his 4-day Christmas visit to Iraq as one full of meaning to a Church that, amidst suffering and tribulation, bears witness to the joy and beauty of the Gospel. He expressed the hope of the Iraqi faithful for a visit by Pope Francis and underscored the importance of collaboration between Christians and Muslims for a peaceful future in the country.

The Vatican’s top official regarded his visit as a moment of grace during which he felt great emotion and joy in being able to convey to Iraq’s Christians the closeness, affection and blessing of Pope Francis.

While being an encounter of joy during Christmas festivities, he said, his visit was also an occasion to share the sufferings of recent years, the uncertainties of the present and the hopes for the future.

Witness
In his various speeches and homilies during meetings and celebrations with the Christians and civil and political authorities, the cardinal said he insisted on their witness to the Universal Church. He said he conveyed the Universal Church’s gratitude for their example and capacity to bear sufferings for the sake of Jesus.

But what struck him most he said was the pride with which Iraqi Christians were living their faith amidst their difficulties, trials and sufferings.

Card. Parolin said he was particularly touched by the destruction of Mosul caused by the war in which churches, houses, buildings and every part of the city were laid waste. But at the same time, these very churches, both the Chaldean and the Syro-Catholic, were full of people, men, women, children and young people, all singing and praying during worship.

A symbol
In this regard, he recalled an episode in the northern city of Mosul where it was difficult to walk because of the rubble everywhere. At a certain point, the governor of the city came up to greet him and held him by the hand. Card. Parolin regarded this gesture as symbolic of the collaboration between Christians and Muslims by giving a hand and helping one another. Just at that moment, he said, it began raining and a beautiful rainbow appeared in the sky – a symbol of peace and alliance. 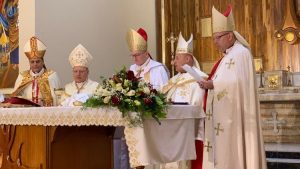 Possible papal visit
Asked about whether his visit raised hope for a possible visit of Pope Francis to Iraq, the Vatican Secretary of State said, “all of them, with one voice, hope that he can visit Iraq as soon as possible and comfort them personally.” Card. Parolin hoped that for this to happen proper conditions be created for the Holy Father to be able to share moments of prayer and encounter with Iraqi brothers and sisters. “Certainly it would be a great encouragement for them in the difficulties they are still facing,” he added.