News from EuropeNews from Hungary

The Vatican’s public relations office has confirmed that Pope Francis will visit Romania between the 31st of May and 2nd of June. It seems also sure by now that the Pope will visit the Hungarian pilgrimage site of Csíksomlyó during his visit to the country. He will probably celebrate a mass similar to the famous event of the annual Csíksomlyó Pilgrimage in Szeklerland.

According to Q Magazine, and Székelyhon Pope Francis has accepted the joint invitation of Klaus Iohannis, Romanian President of the Romanian Government and the Romanian Catholic Church. The Holy Father will visit Bucharest, Iaşi, Blaj (Balázsfalva) and Csíksomlyó, the Virgin Mary Shrine. A detailed schedule of the visit will soon be published.

Francis will be only the second pope to visit Romania – the first was John Paul II who went there in 1999, making a bit of history in the process, as this was the first time a pope visited a predominantly Orthodox country since the Great Schism of 1054, the break of communion between what are now the Catholic Church and Eastern Orthodox churches.

The Pentecost Pilgrimage of Csíksomlyó in Szeklerland is the largest religious and ritual event of Catholics in the Carpathian Basin,

an event in the area around the Franciscan monastic settlement of Somlyó that has been referenced in ecclesiastic documents and oral tradition going back to 1442.

The central element of the pilgrimage is the veneration of the Virgin Mary. Hundreds of thousands of participants express their gratitude with donations and commemorative plates, showing their devotion through prayers and religious folk practices. 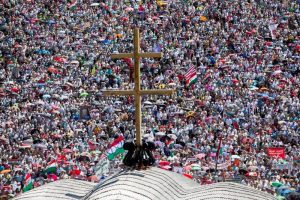 A well known annual Whitsunday pilgrimage gathering in the village called Csíksomlyó that attracts over 100,000 mostly Hungarian and Szekler participants each year.