News from EuropeNews from Hungary

Earlier this week we reported on the upcoming visit of the Holy Father to Romania – Szeklerland. Now we want to share some extra information about the plans and the background of this important event which will take place at the end of May this Spring. The Papal visit is considered by many to be a sign of respect for minorities and that it will have a beneficial effect on families, on parents and their children and indeed on all other forms of human relationships, even on international relations.

The Pope’s visit to Csíksomlyó, Transylvania is part of a possibly three-day long tour to Romania. The motto of the whole visit is “Let’s Walk Together.” The trip’s logo, in blue and gold, depicts a group of Romanian people walking beneath an image of Our Lady, which according to a statement from the Holy See Press Office, evokes the Virgin Mary’s care and protection of the peoples living in Romania.

The Vatican press office also noted that Romania has often been called “the garden of the Mother of God,” which is a phrase also used by Pope St. John Paul II during his visit to the country.

“The visit of Pope Francis takes up this Marian accent, inviting everyone to join forces under the protective mantle of the Madonna,” the statement continued.

Agreement about this landmark visit, however, did not just happen by itself. Ferenc Potyó, a prelate and the General Vicar of the Roman Catholic Archdiocese of Alba Iulia, told Székelyhon that:

The Catholic community lobbied and worked continuously for long years in order to make this visit a reality.

The Romanian authorities frequently hindered their work, since where the Pope goes — the world goes too. “A lot of people appearing waving red, white and green Hungarian flags is not too appealing to the Romanian government” according to Potyó. However, the Catholic community persisted, and their wish was finally granted. Potyó commented that:

“this is a decision of great importance as the Papal visit affirms the faith of Catholics, reassures those who were oppressed by Communism and gives courage to religious and ethnic minorities.”

The dean noted that the whole world would watch Szeklerland and Csíksomlyó and that “by our presence, we will prove that Hungarians, Szeklers and Szeklerland do exist, it cannot be denied any more.”

Zoltán Oláh, the press officer of the Papal visit, revealed that there is a strong chance that the Pope will celebrate an outdoor Mass, similarly to what is traditional at the Csíksomlyó Pilgrimage; however, the Holy See has yet to confirm this. 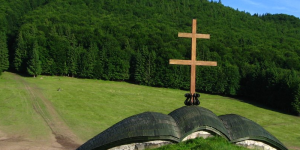 The annual Csíksomlyó Pilgrimage is made in commemoration of the Catholic Székely (or Szekler) population’s resistance to pressure from the Hungarian King John II Sigismund Zapolya to convert to Protestantantism. The group refused to abandon the Catholic faith and emerged victorious in a battle which took place on the Saturday before Pentecost in 1567.