Commemorations were held in Budapest on Sunday, to mark Holocaust Remembrance Day, the anniversary of the liberation of the Auschwitz-Birkenau death camp in 1945. Gergely Gulyás, head of the Prime Minister’s Office, said in his address at a ceremony held at the Holocaust Memorial Centre that the Hungarian state had “failed to protect its citizens at the time of the Holocaust”. “There was no collective crime, responsibility lay on the state,” he said.

Referring to political developments in Hungary before WWII, Gulyas said that “Hungarian society was not left untouched by an increasing anti-Semitism, which was manifested by intolerable curbing of the rights of Jews”. “It is a fact that Jews were deported after Hungary’s German occupation, however, all that could not have happened without participation by the Hungarian administration”.

The Hungarian government is “proud that Jews and non-Jews now live side by side in security, among flourishing cultural and religious activities,” Gulyás said. “Hungary has learnt the lessons of the past and is aware that a shared future must be planned and built together with the Jewish community.”

Israeli Ambassador Yosef Amrani said that the Holocaust is an “incomprehensible, indescribable tragedy, which we must remember”.

He added that it is a “moral obligation for us to remind other people of the tragedy that happened to us” so that nobody in the future could become a “target for extermination”.

András Heisler, head of the federation of Hungarian Jewish communities (Mazsihisz) said at another commemoration that the Holocaust is not an “internal affair” for the community, but an issue concerning the whole of society.

“Real freedom is if the obligation to remember rests on the whole of society and society jointly counters efforts to falsify history,” he said.

“Remembrance must be universal; Jews and non-Jews, the successors of winning and losing powers must jointly and honestly face the facts,” Heisler said.

Discrimination and aggression are no solution, the opposition LMP party said in a statement on Sunday, marking International Holocaust Remembrance Day, the anniversary of the liberation of the Auschwitz-Birkenau death camp in 1945.

Human dignity should be protected not only from physical aggression but from the harm caused by written and verbal abuse or political propaganda, the statement signed by co-leaders Márta Demeter and László Lóránt Keresztes said. “Next to paying respects, it is also necessary to face the crimes of the past and to declare: Never again!”. 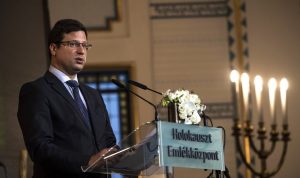 Providing “encouragement to anti-Semitism” is unacceptable in Europe, ruling Fidesz said on Sunday, on the occasion of the International Holocaust Remembrance Day.

In its statement, the ruling party insisted that many Western European Jews again live in fear because “with mass immigration, anti-Semitism has been released onto the continent”.

According to the statement, those “allowing masses of anti-Semitic immigrants to enter are committing a historic crime” and suggested that some parties of the Hungarian opposition are “ready to side with anti-Semitic, extremist political forces in the hopes of gaining power”.