A bishop who claimed to have received death threats for criticizing the Philippine government's "total war" on drugs has received a boost from Pope Francis.

Bishop Pablo Virgilio David of Kalookan said his “eyes blurred with tears” when the pontiff told him that he was aware of what he was enduring. “I want you to know that I know your situation. I know what you are going through. I am praying for you,” the prelate quoted the pope as saying.

According tp UCAN News, Bishop David was in Rome last week with other Filipino prelates for an audience with Pope Francis.

The meeting, which happens every five years, is obligatory for bishops who must visit the “threshold of the apostles” to report on the state of their dioceses or prelatures.

Bishop David said he was surprised when at the end of the meeting the pontiff stopped him and gave him a special blessing. “I was ready to step out already when he held my arm and said, ‘Wait. Please let me give you a special blessing. I want you to know I am with you as you face trials in your ministry in your diocese,'” Bishop David posted on his Facebook account.

“Then he pulled me to himself to give me a warm paternal embrace, pressing his head against mine, and brushing his hand gently on my back as he whispered into my ears, ‘Courage.’  ” The bishop said he “felt like I had been embraced by Peter himself.”

Bishop David handed the pope a translation of the book “The Gospel of Love According to Juan/a,” which the prelate co-wrote.

“I had told him that the translation was a labor of love of a fellow-Argentinian of his…. He was delighted to find out that the book was in his mother tongue,” wrote the prelate.

“He chuckled and said, ‘We’re like dust, aren’t we? We’re everywhere in the world.’ I quickly retorted and said, ‘So are we, Filipinos, Holy Father.’ And he laughed,” added Bishop David.

Relations between the administration of President Rodrigo Duterte and leaders of the Catholic Church in the Philippines have been difficult. 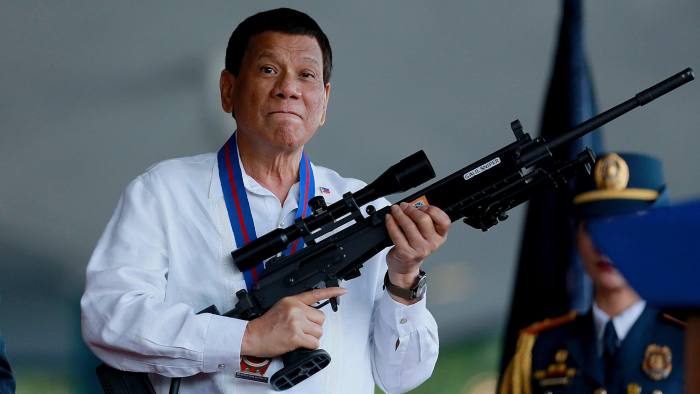 The president has accused bishops and priests of being corrupt and sexual predators, even calling bishops “useless” and that they should be killed.

Several church leaders, including Bishop David, have been critical of Duterte’s controversial methods in fighting illegal drugs, which have reportedly resulted in the killing of more than 20,000 suspected drug users and dealers.