Another act of vandalism took place this week in the Polish city of Gdańsk. After an earlier series of desecration of monuments and religious symbols in many Polish towns, this time the joint monument of Pope John Paul II and US President Ronald Reagan has been targeted. The image of the American leader smeared with red paint is accompanied by an offensive comment written near the image of the two men.

The destruction and desecration of religious monuments and national symbols have become widespread recently. Leftist activists keep on provoking Catholics and nationalists by destroying images sacred to them.

Much of these disgraceful “acts” belong to far-left activists. This time, however, the monument of Pope John Paul II and the US President Ronald Reagan was ridiculed.

Given the circumstances, it is reasonable to suspect that the monument was destroyed by supporters of the Black Lives Matter movement given that it was the statue of the American president that has been specifically targeted.

The plaque which forms part of the monument reads: “This genocide will rot in hell”. The term “genocide” is included on the plaque commemorating Ronald Reagan; his figure was also smeared with red paint. The figure of John Paul II has fortunately not been tampered with in any way.

This is how the statues look like after they have been smeared:

In 2013, a leftist radical even cut the arm of the statue depicting the former American President: 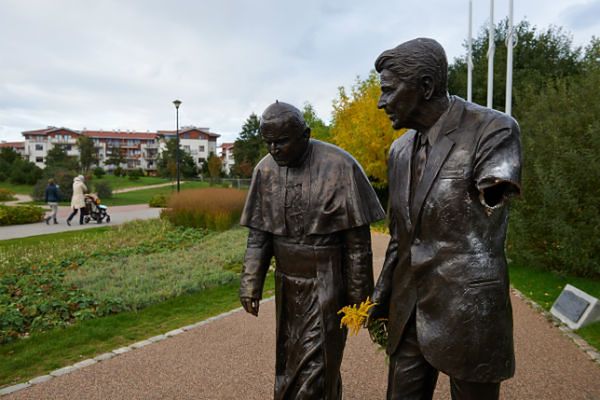