AUGUST 20, SAINT STEPHEN AND THE FOUNDATION OF THE HUNGARIAN STATE- REPOST

The 20th of August might well be the most important national holiday for Hungarians. This day commemorates the foundation of the Christian state that took place in 1,000 AD when Saint Stephen is celebrated— the first Hungarian king. Chronologically, the founding of the State is the next significant milestone that occurred after the land conquest in the Carpathian basin around 896 AD.

The Hungarian conquest took place under the leadership of high-chieftain Árpád, who later brought into being the Hungarian National Assembly in 902 at a small site called Pusztaszer (today: Ópusztaszer). This might be considered as the first effort to unify the Hungarian people with the help of the seven tribe leaders. Over the following seventy years or so,  the Hungarians conducted numerous raids into western Europe, called ‘adventures’. Because of this, the Hungarians were feared almost all over Europe.

The great change: Christianity and forming a settled European country

In the 970’s a descendant of Árpád called Géza, wisely recognised that these looting adventures could not continue and “Hungary” would have to adopt Christianity if it wished to survive. The Hungarian troops suffered some heavy losses on several occasions in the west and the east, which forced them to end activities around 970. Apart from the military losses, the Hungarian region was surrounded by Christian kingdoms: the Holy Roman Empire on the west and the Bulgarian Kingdom to the east. Under these circumstances the Hungarians had two choices: either to be scattered and left to perish as a dying nation or to solve the matter by converting to Christianity. Géza opted for the second option, though this was not an easy task. The breakthrough came in 973. The territorial reason and indeed the desire to survive, by introducing Hungarians to Christianity is one indicator that this religious endeavour was motivated politically, and was not just an outcome of spiritual revelation. 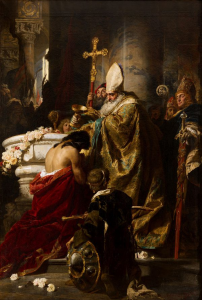 Stephen was the only son of Géza. His date of birth is uncertain, but most historians agree that he was born around 975. Although he was born as a pagan named Vajk, he was later baptised and renamed Stephen. Hungarians followed the practice of seniority when it came to electing new leaders, but Géza wished to break with this and introduce, primogeniture, which was the Christian way of giving preference to the firstborn.  If seniority were to be respected, then a distant nephew of Géza, Koppány, would have followed him as high-chieftain. If primogeniture were followed, then it would be Stephen. Needless to say, Koppány revolted against Stephen when Géza died in 997, which resulted in a bloody conflict and Koppány ending up being executed. The coronation of Stephen took place on  Christmas day 1000/1001, which was then New Year’s Eve. Stephen received the approval of Otto I (head of the Holy Roman Empire) and Pope Sylvester II, along with the royal crown. Historians argue that the coronation was more needed for international recognition than to win the respect of the Hungarian leaders.

With the coronation, Stephen became the last high-chieftain and the first Hungarian king. This marked the beginning of the Árpád dynasty, the unification of Hungarian territories and the foundation of medieval Christian Hungary.

As Géza arranged international marriages for all his children (four daughters and a son) for the sake of both diplomacy and peace, Stephen wedded princess Giselle of Bavaria, from the family of the Holy Roman Emperors. After his death in 1038, Stephen was canonised as a Catholic saint in 1083 and as an Orthodox saint in 2000.